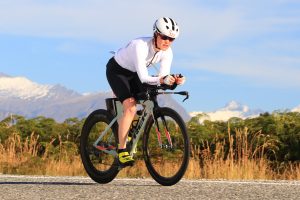 Coming into this race I had the best winter training block I’ve ever done and was fitter, faster and lighter than before. My swimming and running were going well and my power stats on the bike were showing a big improvement on last year. Coupled with a fantastic bike set up (Trek Speed Concept TT, Bontrager Aeolus wheels and Bontrager Ballista aero helmet) provided by Bournemouth Cycleworks as one of the sponsored riders on the UK Biking-Bournemouth Cycleworks- Trek race team, I was ready for a good race.

We flew out a week before the race and race week was spent adjusting to the time difference and course recces. Come race day, I felt less nauseous than I normally do (despite eating cold porridge in the car at 5am on the mountain pass between Quenstown and Wanaka), I was feeling good and very excited to get out there.

It was a running start so I placed myself at the front in line with the first buoy, I’m not shy about getting in a good position and confident I can get out fast. I expected to have to scrabble for this spot but for some reason most people were out to my right. Why, I’ll never know! The gun went and I was gone and had a very comfortable start with plenty of space. Found some toes, too slow, next pair, too slow, next pair, they’ll do. Wasn’t sure what pace I was holding but did feel perhaps I should push harder. Tried to pass these toes but found they caught me at each buoy. It’s going to be a long day, may as well settle in behind if I’m not going to get away. It was a two lap course and the last stretch of each lap was into the sun. I was swimming blind and could only follow the toes so I hoped for the best that they would a decent line. Out of the water in 1.05 and I could here Jules shout my time. A bit disappointed but there were plenty of miles ahead to make up for it and I was determined not to panic.

A long run over the bridge to T1, grabbed my bag and into the changing tent. I decided to wear a long sleeve aero top, gloves and bike shorts. It was going to be long hot day, I needed to cover up and make sure I was comfortable. Managed to stand on my sun glasses and had to put the lens back in, not ideal and not my best transition.

Out on the bike and two girls came with me. They shot off and I told myself stay steady, trust in your training, it’s a long day. There was no way I was going to mess up like I did in the Celtman last year (puncture, panic, push too hard, die on the run!). I watched one girl attack the climbs early on and I thought to myself ‘she can’t hold that, I’ll catch her later’. The plan was to average 160ish watts, 170 normalised power and I was sticking to it – trust in your training, Naomi.

It was a beautiful course. Sun, lakes and snow-capped mountains. The Trek Speed Concept felt great but my god the road surface was rough! And two dodgy timber bridges on each lap, you just had to hit them fast and hoped nothing went flying! Some out and back sections meant I could see what position I was in. I could see I wasn’t gaining on any of the girls in front but I wasn’t dropping back either. Trust in your training, Naomi.

First lap my power was 10 watts higher than it should be but I knew this would drop so just went with it. It was hot on the 2nd lap and the roads were exposed, I was very glad I wore my long sleeve top for protection as the sun is so strong. Every aid station I grabbed a bottle, took a sip, filled my aero bottle and then threw the rest over me. Off the bike as 7th age grouper, bike course executed as planned and I knew I had legs for the run.

Racked my bike off with my helmet and on with my run shoes. Running out of transition and the official shouts at me – ‘where’s your number?’ Foolishly I had taken off my number belt when I put on my run belt that had my gels for the run, god only knows why?! Run back in grab my number and I was off.

Time to get the head down and run. This time the plan was to run the best I could and have no regrets. If I could hold a 5.20ish min/km average I could have a 3.45 run which, based on previous results, was a very good age group split on this course. It was hot, about 28 degrees, and I was concerned as heat is not the friend of a pasty Irish girl. But every aid station I drank and took sponges. I kept myself soaked and as cool as possible. 5km in and I caught the first girl, which was motivating. I was winding my way along the trail and couldn’t see far in front. I wonder how far the next girl was? Then I came to the infamous Gunn Road. Long, exposed, tarmac hill and there was the next girl. I put my head down and took a steady pace up the climb, determined to catch her on the hill. I caught her at the top and was looking forward the descent. However it was more undulating and hot headwind made it very unpleasant. It was here I met Sheena and Jules on their bikes and they told me my position and that I was catching the girls in front. No regrets, Naomi.

Back to the finish line and it was out again for the second lap. It was Gunn Road again before I caught the next 2 ladies and when Sheena and Jules told me I’d reduced the gap on 2nd lady from 15mins to 3mins. I was trying to run harder but my pace wasn’t picking up. I caught a glimpse of the lady I needed to catch at the last out and back and tried to kick on. I got a guys shoulder and picked up the pace running with him but it wasn’t enough. I was within 2.5 minutes of 2nd lady in the end, I did my best and had no regrets.

Pleased with a solid swim and bike and delighted with the fastest age group run of the day by over 5.5 minutes. Not bad for a very early season race on the other side of the world on UK winter miles!

Special thanks to Jules and Sheena for supporting me on the day, nothing like knowing how far ahead the girl in front is for motivation. And a huge thanks for the ongoing support I’ve been getting particularly to Bournemouth Cycleworks for my awesome bike set up, Fenland Runner for my Aplha Woolf running shoes and Graeme Stewart Coaching for getting me to the start line in the best form I’ve ever been in.

It is a worrying time for everyone, and we ask that you to help us to reduce the risk to yourselves and our staff in order that we can continue to serve you and care for your bikes. All customers are required to wear a mask in store. If you are excempt then we are happy to serve you outside.

Open By Appointment ONLY

We are open and are working as best we can on an appointment ONLY basis, please book an appropriate appointment online.

Please pay by card if you can.

If you are looking to chase a repair or an order collection, we are not giving updates over the phone, we just do not have the capacity due to the volume of work we have. Please email info@bournemouthcycleworks.co.uk, or contact us using this form and we will give you an update as soon as we physically can. Please understand we are all working as hard as we can, and repairs and bike builds are being done in strict order that they were received as parts and stock become available. We are seeing delays from all our suppliers now as well as delays in the courier and postal system.

We are open for general browsing by appointment. Please refer to our website www.flcuk.com – you can order online for delivery or click and collect if you wish.

If you are looking to check stock of an item, then please refer to our online shop, www.flcuk.com, where we are now displaying stock levels to help you see what we have. If you can place an order online, or by email, that would be a huge help, we are of course available on the phone if you cannot.

Book A Collection and Shop Online

If you would like to us to come and collect a bike for repair, then please book a collection.

We can also deliver products locally, or post as well at the moment.

You can either shop online: