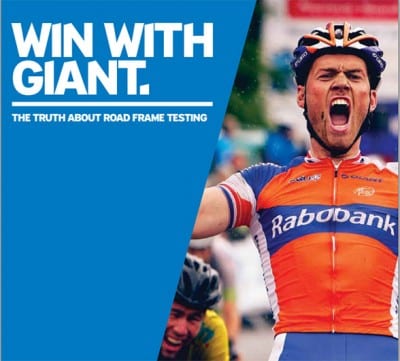 Giant are not going to be silent any more.

They have never before presented the data you find here. These are the test results comparing their premium road bicycle frames against the relevant competitors.

Some of their competitors have done these same tests but they don’t include Giant in their published results. That’s because the Giant bikes are superior, and they can’t figure out a way around that superiority. So they just leave Giant out.

Giant weigh their road frames against their relevant competitors – the full production frame, uncut fork, full paint and graphics, and all production hardware like derailleur hangers, water bottle bolts, and cable guides. All the frames are equivalent sizes. If they don’t have an Integrated Seat Post, like the Giant TCR Advanced SL (ISP), they add 250 grams – the average weight of a high-quality composite seat post – to the frame weight. The TCR Advanced SL (ISP), the same bike frame ridden by the Rabobank Team, is the lightest. No question.

Steering stiffness is felt under hard cornering and is a result of the fork, headset, and headtube all flexing under load. Unlike some of Their competitor’s testing – which substitutes a steel bar for the fork – Giant uses the production fork included with the frameset providing complete system performance information that translates directly to ride quality.

For this test, each frameset is fixed and locked at the rear dropouts. Side force, simulating cornering, is applied to the production fork dropouts to duplicate input forces from steering and terrain. The deflection at the fork dropouts is measured; the higher the value, the stiffer the frameset.

For this test, each frameset is fixed and locked at the fork dropouts and the rear dropouts, inclined to 10-degrees, and a steel crank is installed and rotated to 45-degrees. Force is applied to the end of the crank arm. The deflection at the bottom bracket is measured; the higher the value, the stiffer the frameset and better the pedaling efficiency.

Giant number two here, and they are okay with that. That’s because among the top five framesets (and note that Giant frames occupy three of those top five), the stiffness is so substantial that no rider is going to flex any one of those top five more than the others.

Giant wins. The reason is because Giant is the only major bicycle manufacturer in the world that controls the entire process from start to finish – from the raw carbon thread (or from Giant’s own aluminium forge), to a finished bicycle, to the Giant retailer, to your hands. No other major manufacturer has this complete control, so they can’t hit these numbers.

Every Giant bicycle – every angle, curve, and tube junction – is born from world-leading technology and craftsmanship. Giant’s continuous research, development, testing, and refining means unrivalled performance for the ultimate ride.

But ultimately the test that really matters is yours. Pay us a visit and take one for a test ride. Riding is believing.

Visit www.WinWithGiant.com and view the video now, and download the test data here.

It is a worrying time for everyone, and we ask that you to help us to reduce the risk to yourselves and our staff in order that we can continue to serve you and care for your bikes. All customers are required to wear a mask in store. If you are excempt then we are happy to serve you outside.

Open By Appointment ONLY

We are open and are working as best we can on an appointment ONLY basis, please book an appropriate appointment online.

Please pay by card if you can.

If you are looking to chase a repair or an order collection, we are not giving updates over the phone, we just do not have the capacity due to the volume of work we have. Please email [email protected], or contact us using this form and we will give you an update as soon as we physically can. Please understand we are all working as hard as we can, and repairs and bike builds are being done in strict order that they were received as parts and stock become available. We are seeing delays from all our suppliers now as well as delays in the courier and postal system.

We are open for general browsing by appointment. Please refer to our website www.flcuk.com – you can order online for delivery or click and collect if you wish.

If you are looking to check stock of an item, then please refer to our online shop, www.flcuk.com, where we are now displaying stock levels to help you see what we have. If you can place an order online, or by email, that would be a huge help, we are of course available on the phone if you cannot.

Book A Collection and Shop Online

If you would like to us to come and collect a bike for repair, then please book a collection.

We can also deliver products locally, or post as well at the moment.

You can either shop online: